Chapter One – The mad suggestion #DeviExploresSA

I’m Devi. I’m a South African investigative television journalist.  It’s a crazy job. But I love it.  Every single mad 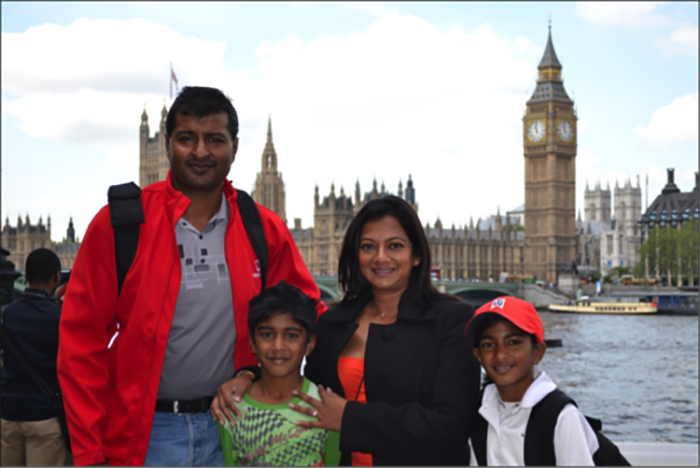 I’m Devi. I’m a South African investigative television journalist.  It’s a crazy job. But I love it.  Every single mad minute of it.  There isn’t much downtime – journalists are always working, even when they’re meant to be taking a break.

Which brings me to this blog.  I’m going on holiday.  To Cape Town. It’s a road trip with my family (long-suffering husband and two children, both under 13).  I can’t just get into a car with some sunblock and a happy smile.  No.  I have to launch a website and write a blog about my trip.   I’m sure the state of my mind will be discussed in this blog at some later stage.

Goal: Not sure if a road trip to Cape Town is a good idea but wants to create happy memories and prays her family survives it.

DAUGHTER: KAIYUREE “TIGER” MOODLEY. 13 and a half. First year in high school.  No 2 in Europe in her age group for golf.  Top 15 in SA Girl’s Under 19, top 10 in Gauteng Junior Ladies Golf.  Golf mad. Seasoned local and international traveller.  Very dry sense of humour.

Goal: Just wants to get to Paarl to play golf.

Achilles heel: Too much golf on the brain.

SON: SAYURAN “CHATTERBOX” MOODLEY. 11.  Grade 5 but general knowledge outstrips even his mother’s.  Asks far too many intelligent questions and believes the Mother is the most beautiful woman in the world.

Goal: To keep his family entertained during the road-trip.

Achilles heel:  Does not believe that silence is golden and is far too charming for his own good.

The Father (P) had been yonking on for years about his dream road-trip to Cape Town. I pointedly ignored him.  Why, in a civilized world, would anybody want to drive nearly 12 hours (with the young Brother and Sister whining in the back seat) when we could fly?  So much more civilized.

But, P persisted.  He wanted to re-create a similar trip he made with his own family back in the 1980s – a trip which (by his own recollection) was fraught with car trouble and lonely, dark roads.  I started feeling guilty.  P never asks for much.  Perhaps I should comply?  Just this once?

Then, in January 2015 a combination of fate and co-incidence began to bubble.  The Sister had a golf tournament in Paarl in April. It was school holidays and the run-up to Easter.  It was all rather fortuitous.  I’m OCD. I started planning.  But the more I organised and researched, the more I started to panic.  Would the family survive the madness of this trip?   Have a look at the plan: 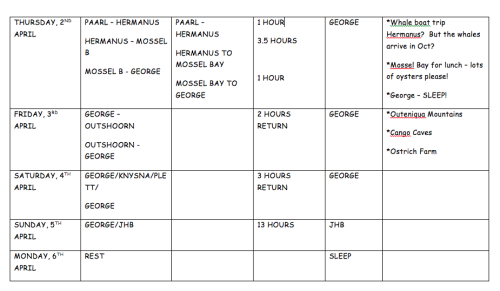 THE BLOG: The mother wants to keep a frank blog about the trip because she fears nobody would believe her if she had to verbally recount the events later.  The schedule is punishing – starting in Johannesburg to Paarl and then threading our way back via Hermanus, Mossel Bay, George, Oudtshoorn and Plett.  All in 8 days!

Wish us luck! Wish us safe travels.  I know it’s going to be special.