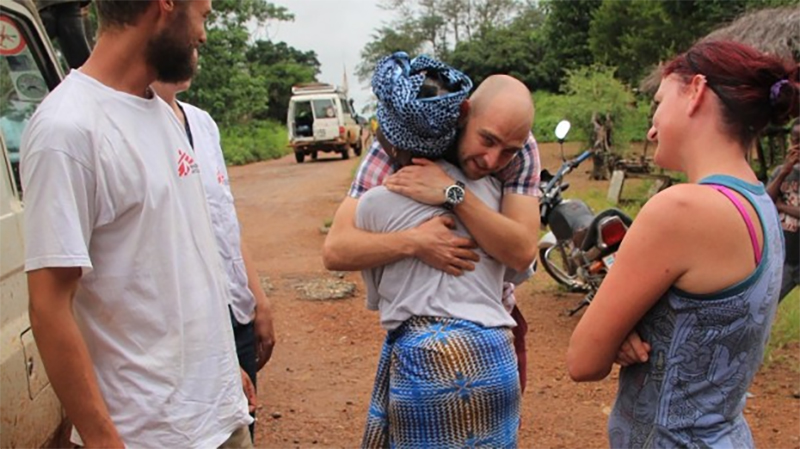 When producer Joy Summers took me along to interview two returning South African doctors who’d been working on the frontlines of the Ebola outbreak, I wondered whether I should make a mental note not to shake hands with them.  I don’t ‘skrik’ easily, but I had those dreadful images in my head of patients lying around listlessly, dying painful and horrid deaths from the worst outbreak of the disease in history.

A quick Google search in the car while on our way to the Medecins Sans Frontieres offices in Braamfontein was the knock on my head I needed.  Of course the doctors weren’t carrying the virus.  Strict protocols would have ensured that medical workers with symptoms would certainly not be running around Joburg speaking at conferences.  I was an idiot to even have thought of it.

Dr Juli Switala is a Capetonian Paediatrician who had just come back from Sierra Leone – very much the frontline of Ebola.  Small in build, she has sharp, intelligent eyes and nerves of steel.  She knows her business and will do whatever it takes to save her patients’ lives.  I’d want her on my side if I was facing a medical emergency.

Stephan Kruger was the other South African doctor just back from Sierra Leone.  Like Juli, he doesn’t see himself as a hero, despite the 10-hour working days, for 9 consecutive days, six weeks at a time.  Everything they eat is washed in highly concentrated chlorine.  They even re-bake bread to minimise their risk of contracting the virus in case someone with Ebola had previously touched the bread.  They work in “hospitals” that are really tented camps and make do with the most basic  equipment.  And, it’s not that -after a hard day at work – they can kick back at the local watering hole and throw back a few G&Ts, catch a movie, or even  hit the gym. Their schedules are relentless.

While they are able to save many from the virus, patients do die.  And, despite all the talk from the WHO of a $100 million donation, Juli and Stephan haven’t seen these promises translate into action on the ground.  The number of new cases increases every week.  That has to get the doctors down?  It does. They’re human.

Juli and Stephan are two doctors who sniffed at the idea of running a private practice in some swish private hospital and, when I asked why they didn’t, both said they couldn’t see themselves being anywhere else than where they are now.

Juli is already back in Sierra Leone and Stephan heads back in a few weeks.

It’s all about choices, I suppose.   We make them every day.  Hindsight shows some were good and some not.

Juli and Stephan are reminders of where choices can take you and how those same choices can feed your soul in ways completely unimaginable.

I hugged them both when I said goodbye.  I just really needed to.

Previous Too Old To Drive? Next Money or Medals