You get glam rockers, glam politicians and glam businessmen, but “there’s no such thing as a glamorous journalist”, says Devi 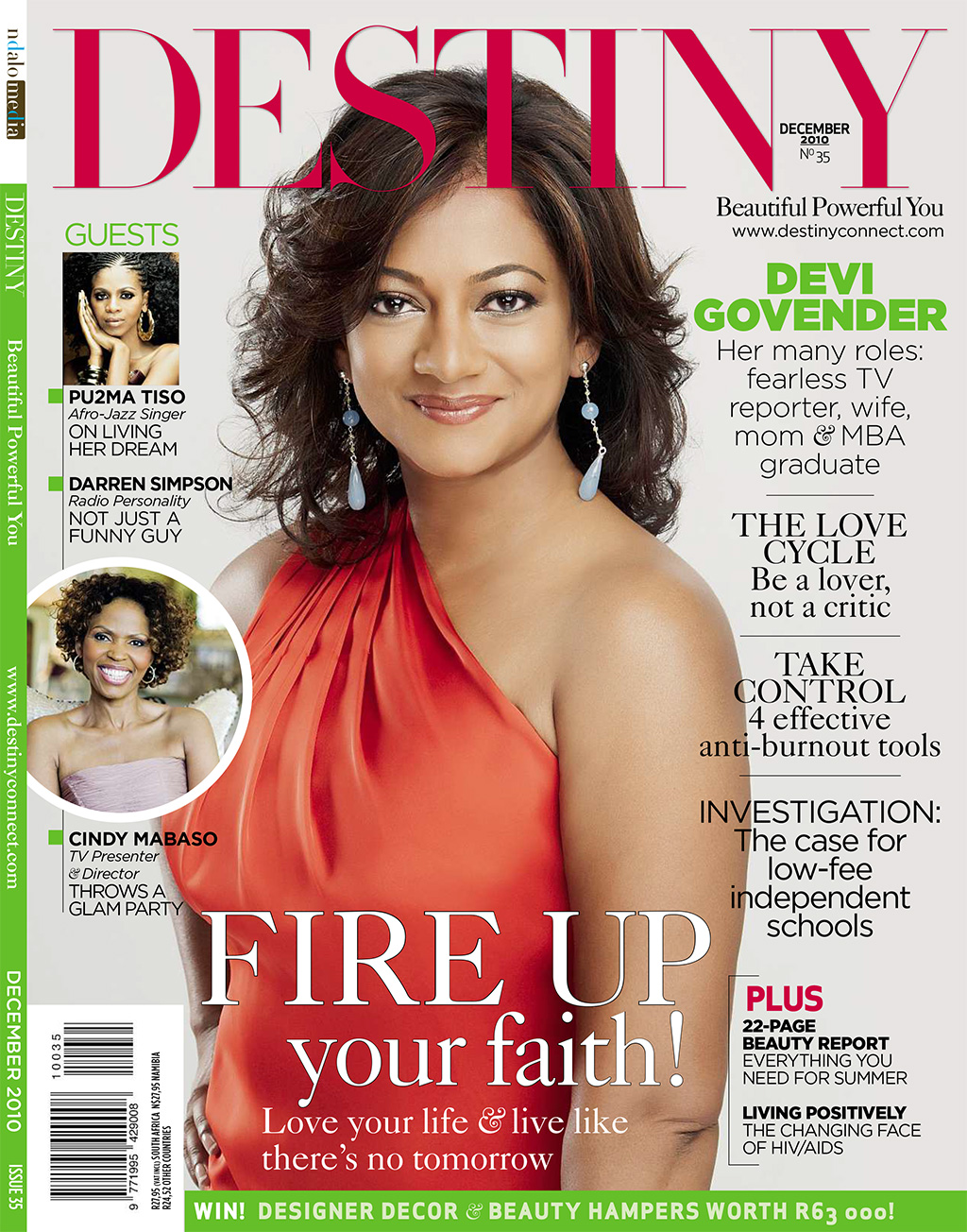 You get glam rockers, glam politicians and glam businessmen, but “there’s no such thing as a glamorous journalist”, says Devi Sankaree Govender (38), the respected investigative reporter whose sassy style ensures that – even after 22 years on the air – M-Net’s Carte Blanche remains compelling viewing

“I don’t see the glamour,” laughs Govender. “I don’t have someone doing my make-up and my hair for me. Who’s going to come to my house at 4am if I have to catch a 6am flight? There’s nobody fawning over me and making sure I’m not thirsty. I’m a journalist. I just happen to look neater than the rest of the crew!”

What viewers also don’t see is the library of research Govender wades through to pull off the hard-edged exposés with which Carte Blanche is synonymous. “The producers do a lot of the legwork and, as the journalist on the story, you have to read big, fat documents, get them all in your head and then do organograms, so you understand who’s who in that complicated zoo. It’s serious investigation and requires a serious amount of reading. That’s the journalism people don’t see; they only see the result of it and think it’s cool and glamorous.”

It’s also dangerous, both in the current political climate – faced with the proposed Protection of Information Bill and Media Tribunal – and in terms of the often violent reactions from those under scrutiny. “There are times when I don’t phone my parents after Carte Blanche, because my father will always say: ‘When you did that story, did you have protection?’ And most of the time we don’t, although it’s available when we need it. The problem is that benign situations can often turn ugly. There’s intimidation and they skop you for real. But it’s the nature of the job, and you learn to grow some big cojones [balls].”

It’s a tricky line to walk as a journalist, and even more so as a wife and mother, but determination is in Govender’s DNA. “My great-great-grandfather was on the original
SS Truro that docked in Durban in November 1860. We’ve got the ship’s number and everything. They came as indentured labourers. I’m so proud of them, because they could have remained indentured labourers. Their never-say-die attitude created better opportunities for generations to come; if they didn’t do what they did, I wouldn’t be where I am now.”

While she wears her history with pride, Govender’s Waka Waka cellphone ring shows where her heart lies. “I know I need to change it, but I just love that tune – it reminds me of a time when SA stood proud. I’m a very proud South African. I love my country. I’m fifth-generation South African. This is home. India’s not my home – it never was. SA is my motherland.”

While “home” these days is Johannesburg, Govender’s a country girl who grew up on a South Coast farm in KwaZulu-Natal. “My grandfather was a sugar cane farmer and my dad’s an optometrist. He studied overseas and then returned to KZN to practise. So I had a very rural upbringing and I went to a convent school.”

It’s hard, but she tries to replicate this simple and uncomplicated home life for her own children. “I keep things very basic at home. While my kids do have the usual gadgets like PSPs and Nintendos, I limit them to weekends and we don’t watch a lot of TV.”

Instead she encourages nine-year-old Kaiyuree and six-year-old Sayuran to “have their own lives”. While her son’s embarking on the voyage into Grade 1 next year, Kaiyuree’s already setting the world alight as a talented young golfer. “She’s been overseas twice this year for tournaments,” says Govender of her daughter, who finished fourth at the US Kids’ European Golf Championships in Scotland last year. Asked if she plays golf herself, she rolls her eyes. “Are you crazy? Where’s the time? My husband’s the golfer!”

With a decade of marriage behind them, Perumal Moodley clearly also keeps Govender on course. “I’m lucky to have a good husband,” she says. “I don’t think anybody else would put up with my nonsense! What’s great is that he thinks my work’s important and he also appreciates what I do at home. After 10 years, it’s easy to become ships passing in the night; it’s about keeping the relationship fresh and reconnecting.”

It’s easier said than done and Govender admits she doesn’t have the balance right. “My life’s a work in progress. Everything’s a learning curve for me. I’m still getting things right and getting things wrong, just like any South African woman,” she says. “When I go home, I’ve got somebody’s bum to wipe, I’ve got homework to finish, I’ve got that poster to help with, I’ve got supper to make. When you’re a mom, it’s not about you any more because you have these little lives that you decided you wanted. You’re responsible for them in every single way.”

Still, she deals with guilt and finds herself working late into the night so that she can spend time with her children before bed. But she’s also a highly organised Virgo who “can’t live in chaos” and who jokes that in a previous life, she must have been Mr Dewey (of library cataloguing Dewey Decimal System fame). Not surprisingly, time management is key to Govender’s daily life; her MBA is a case in point.

Govender recalls 2000 as a particularly busy year, in which she got married, fell pregnant and she and her husband both started their MBA degrees. “I graduated in 2002,” she recalls. But studying when they did was part of a broad strategy. “If we hadn’t done it together, it would have been five years in total that we didn’t have a marriage. I thought if we knocked it off in two-and-a-half years and had the children in the meantime… it was quite an ambitious idea, but we pulled it off!”

Some might wonder why a career journalist would opt for that most corporate of qualifications, but it’s another aspect of Govender’s savvy. “I did it because I felt my own knowledge was lacking on the financial side of things. You have to be very confident in your knowledge or someone can talk circles around you and you won’t understand what they’re saying. Now you can’t talk circles around me, because I understand financial lingo.”

Armed with the facts and loads of gumption, Govender’s developed a reputation for asking tough questions – but she’s also keenly aware of the responsibility she carries. “You can’t accuse someone of crime and corruption unless you have evidence. It’s very easy to get drunk on the idea that you’re powerful, because you have a camera, some lights and two mics. My constant idea is: this guy has a wife and children who have to go to school on Monday, so while I feel that he’s guilty, it’s best that I back this up with facts.”

It’s this sense of responsibility which the ruling ANC’s been talking about bottling in the form of legislation against which the media and civil society have been railing. Govender points out that the Media Tribunal – for now – isn’t likely to affect TV, which already has its own internal tribunal by way of the Broadcasting Complaints Commission of SA, but the proposed Bill is another story altogether. She stresses that while its “sketchy” details make it difficult to discuss the implications, the clampdown on information and the threat of incarceration will undoubtedly deter sources and whistle-blowers and weaken “one of the basic pillars of a democracy – a free and independent media”.

It’s easy for Govender to draw parallels with the world of journalism she entered 18 years ago as the death knell of apartheid was sounding. “I started off in journalism in 1993. I was at the SABC, so I got a first-hand taste of manipulation and fudging. After 1994, everything just opened. Suddenly I could talk about whatever I wanted, I had my own talk show on radio and everything was fantastic. Since then I’ve always been proud of this democracy because it’s basically meant I could say what I want – with responsibility – and I haven’t felt as if I was going to be hunted by my government. Well, let’s see what happens now in terms of legislation.”

Armed with that freedom, Govender’s had the opportunity not only to tackle fraudsters and corruption, but to interview the likes of singer Lionel Richie, Kenyan Nobel Laureate Warangi Mathai, singer Quincy Jones and finance guru Robert Kiyosaki. However, it’s the interview she secured with former President Nelson Mandela in 1994 which she treasures most. She pulled off the coup herself after the young Lotus FM talk show host was summoned to meet the great man who “wanted to know about what the Indian community was feeling in terms of their needs. I told him the only way was for him to get on the show. Two weeks later, he was on. That’s the one interview I just can’t believe actually happened!”

She admits that radio’s still her first love, although she’s also straddled TV and print during her career. In fact, she believes it was during her time as Features Editor at the Sunday Times that she really honed her skills as a journalist.
“For me, print journalism is true journalism because you can’t rely on pictures – you have to rely on the written word and the details there.” She still writes a monthly column for the newspaper and harbours a long-term ambition to compile a “Best of” book of some of her finest columns.

She’d also like to focus more on her corporate communications company, which she operates as a sole trader conducting media training for senior executives. It’s a venture born as much out of entrepreneurial spirit as from business’s inability to understand that the media isn’t the enemy, and that crisis communication is a science. “I appreciate it when I interview someone and they say: ‘Yes, we were wrong,’” says Govender.

Running a business alone is another challenge she finds difficult. “It’s crazy! I’d like to build it more, but I just don’t have time,” she says. She admits, though, that what really sets her pulse racing is the thought of running her own TV talk show one day, “with a live studio audience”.

Next Behind the scenes footage of the Destiny Magazine cover shoot